We are sorry but it looks like your browser doesn't support our website features. In order to get the full experience please download a new version of Chrome, Safari, Firefox, or Internet Explorer.

Dazaifu Tenmangu is surrounded by interesting sights and attractions, from the historical treasures of the Kyushu National Museum and the atmospheric grounds of Kamado Shrine to the commanding Buddhist statues of Kanzeonji Temple and the remnants of the grand western capital of medieval Dazaifu. Explore the area around Dazaifu Tenmangu to make the most of your visit. 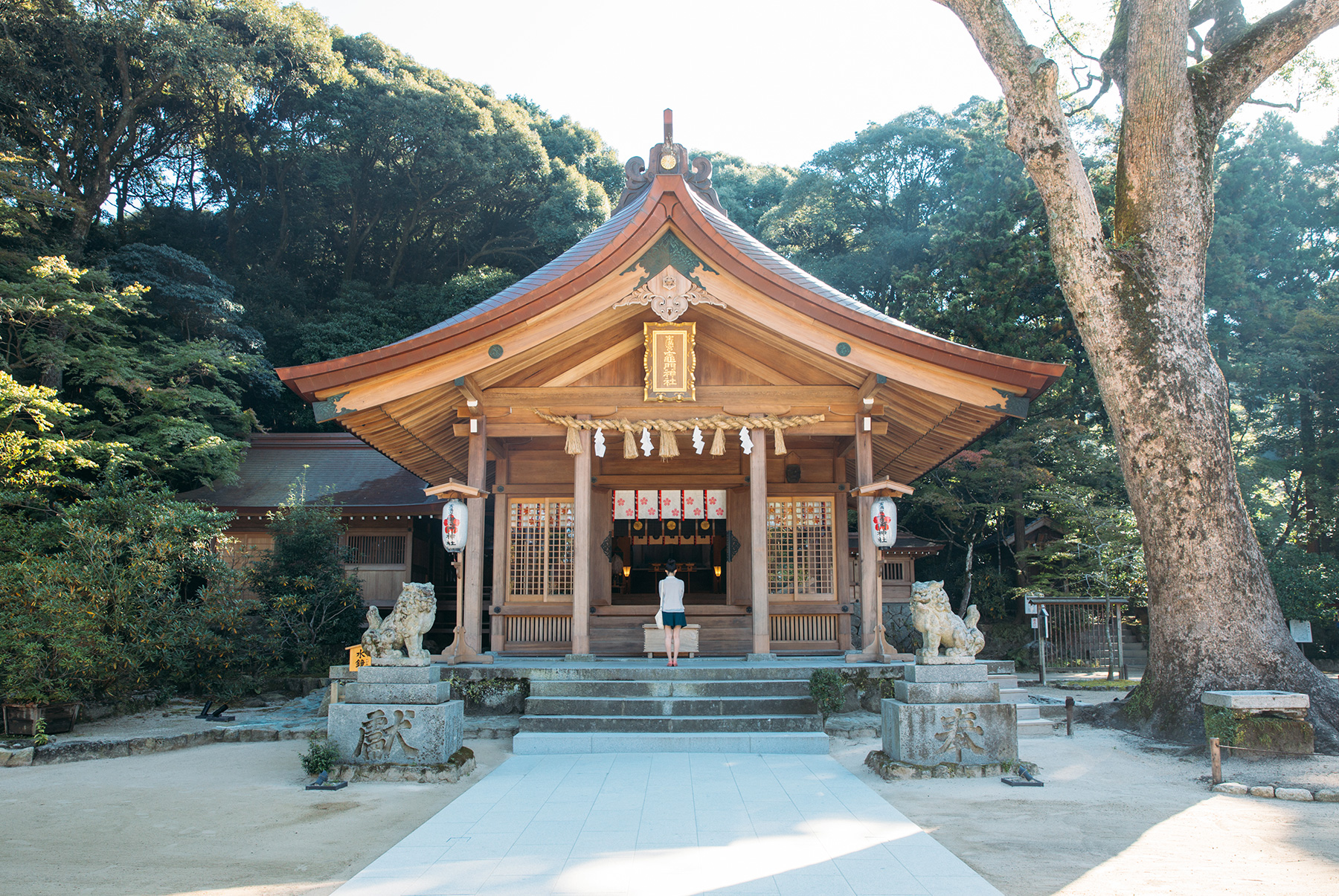 Kamado Shrine juxtaposes traditional shrine architecture and aspects of modern design. It is set on the Dazaifu mountainside, a short five-minute bus or taxi ride from Dazaifu Tenmangu. The approach to the shrine from the nearest bus stop is up gentle stone steps and along a rustic flagstone path that leads under torii gates and through a tunnel of trees. Arriving at the main sanctuary, visitors are enveloped in the woody scent of the forest and the muted, peaceful atmosphere of the shrine—an interesting contrast to the lively atmosphere of Dazaifu Tenmangu.

The mountainside setting affords spectacular vistas across Dazaifu. Some of the best views are from the observation deck behind the amulet office, complete with stylish benches designed by British industrial designer Jasper Morrison. This is a good spot for viewing the shrine's many cherry trees and maples when at their most beautiful in April and November. During these peak visiting seasons, the shrine often operates extended hours and special events; check before visiting for the latest news and information.

Kamado Shrine stands on Homan, a sacred mountain worshipped since ancient times as a dwelling of Shinto deities, or kami. The particular deity venerated at Kamado Shrine is Tamayorihime, the mother of Japan’s first emperor. Tamayorihime has the power to bring people together, attracting many visitors to Kamado Shrine to offer prayers for and seek favor in matters of the heart. Visit the amulet office to the side of the main sanctuary to pick up an amulet, or omamori, for extra romantic fortune. 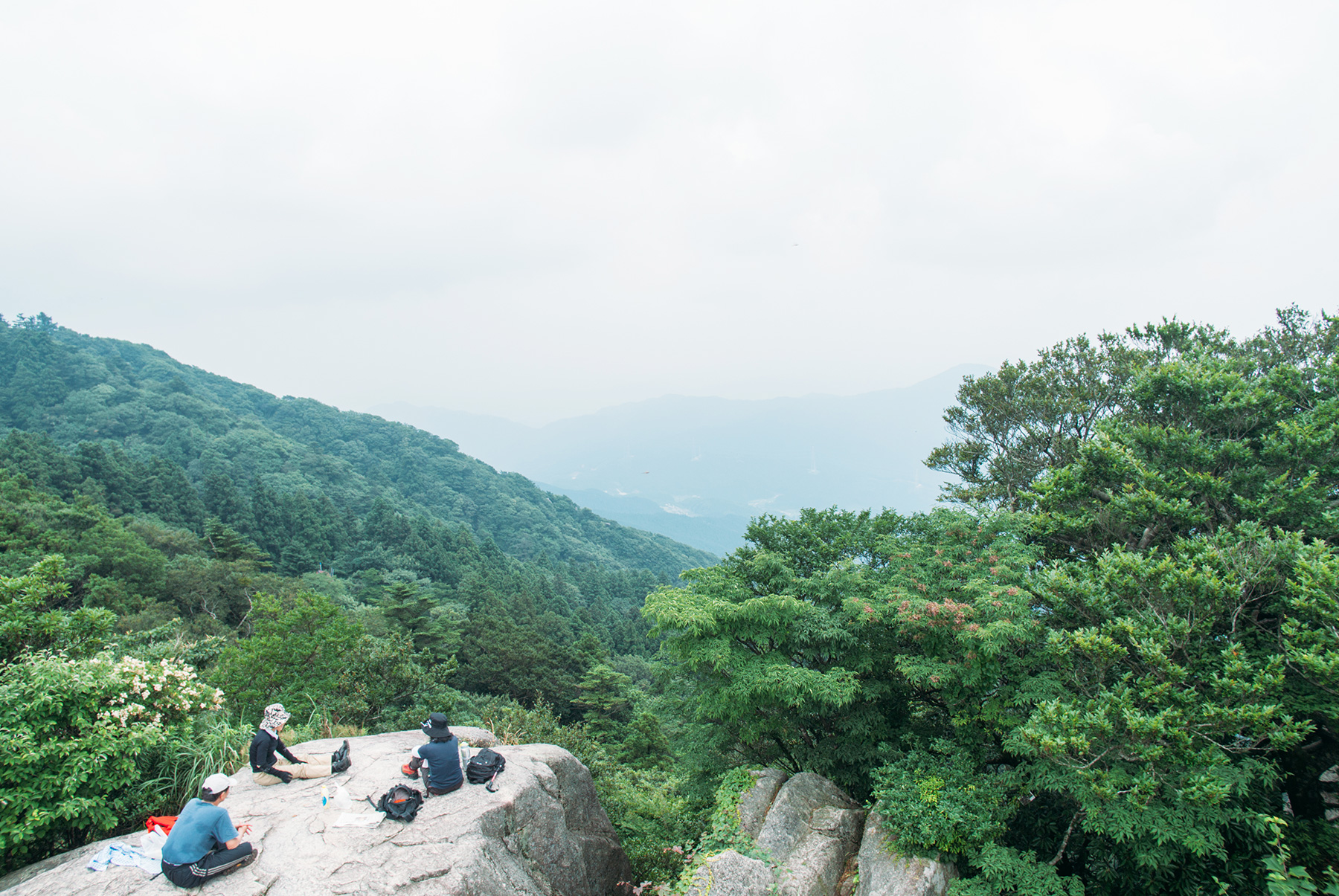 Mount Homan is a sacred mountain to the northeast of Dazaifu. It has been an object of worship and a site for ascetic training since ancient times. Many people visit Mount Homan to pray to the deity of romance and matchmaking, who is enshrined at Kamado Shrine, a tranquil shrine on the mountainside.

From Kamado Shrine, there is a trail that leads to the peak (829 meters) with views out over Dazaifu and the surrounding area. The trail is open to all and can be hiked in a morning or afternoon. The hike is relatively challenging, so a good level of fitness and proper hiking boots and other activewear are necessary. 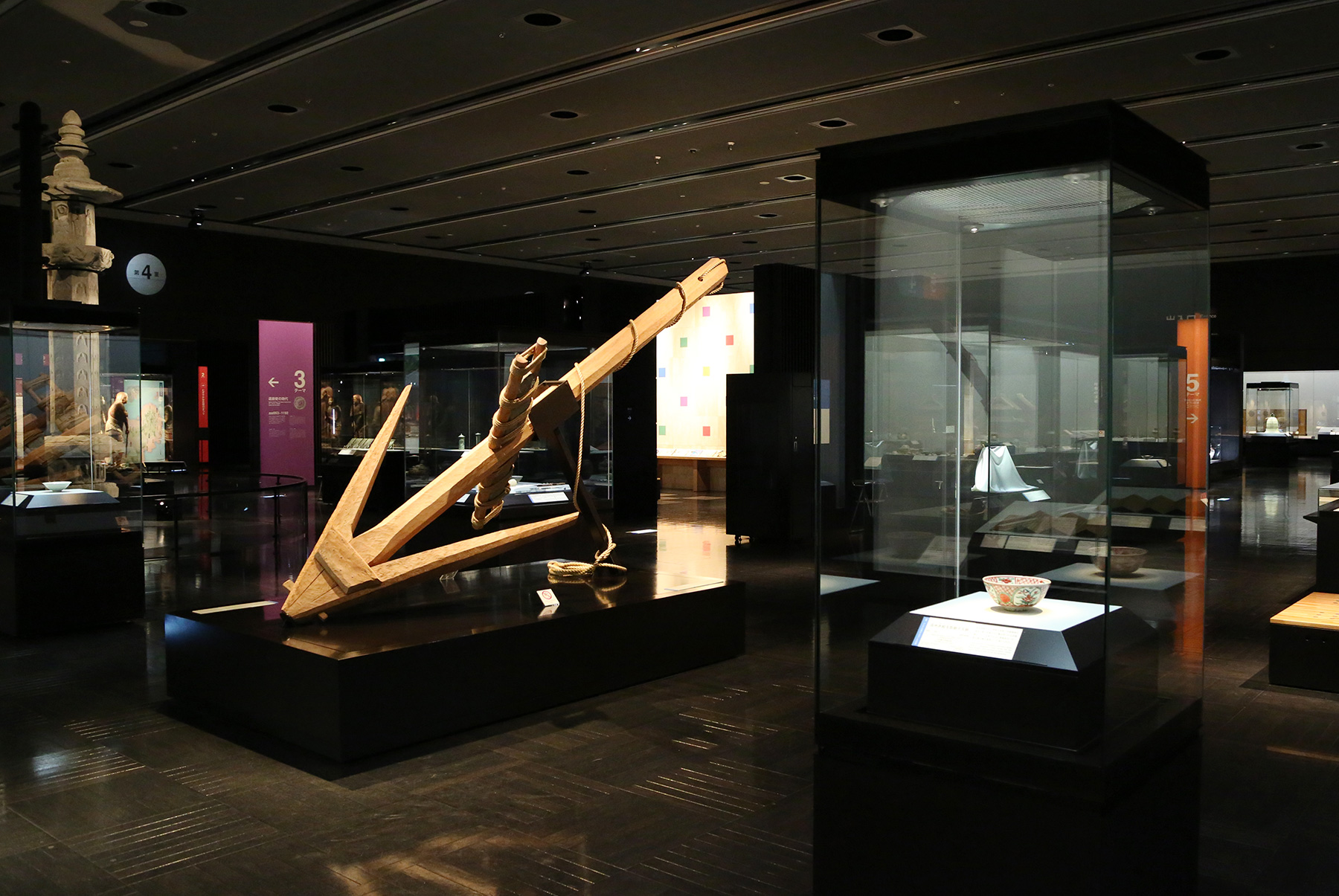 Kyushu National Museum is one of the four national museums in Japan. It is located a short distance from Dazaifu Tenmangu and is accessible via a walkway through the shrine grounds. The museum's exhibits give a broad introduction to Japanese history covering the major periods from the prehistoric Jomon period (14,000–300 B.C.) to the beginning of the Meiji period (1868–1912). A major theme of the exhibits is the development of Japanese culture against the backdrop of Asian history and international exchange. Special focus is given to Dazaifu and the role the former political center played as the gateway between Japan and Asia from the late-seventh to late-twelfth century, when trade along the Silk Road was at its peak.

The museum has a cafe, restaurant, gift shop, and free play-based learning space for children. An entrance fee is charged for the permanent and temporary exhibitions at the museum. Tickets can be purchased on the first floor, including money-saving passes covering entrance to the Dazaifu Tenmangu Museum and the shrine's other on-site museum, the Kanko Historical Museum. 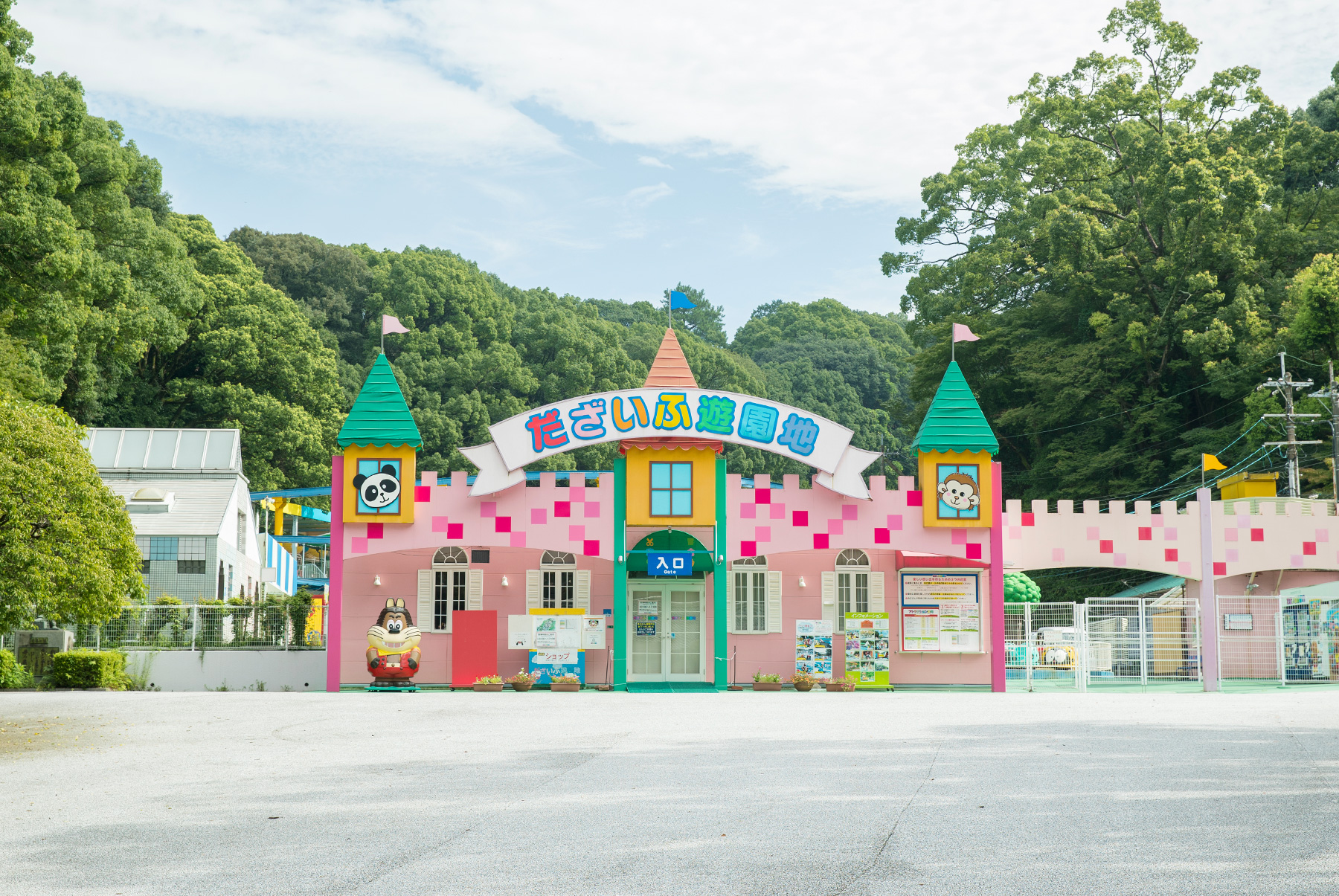 Families with young children may enjoy Dazaifu Amusement Park, a small theme park designed especially with younger children in mind. This slightly retro, laid-back park has gentle rides ranging from merry-go-rounds to waterslides and a "train coaster." A small admission fee is required to enter the park, and most rides are ticketed. You can purchase individual ride tickets as you go, or opt for a multi-ride pass. The park is located adjacent to Dazaifu Tenmangu Shrine and on route to the Kyushu National Museum. 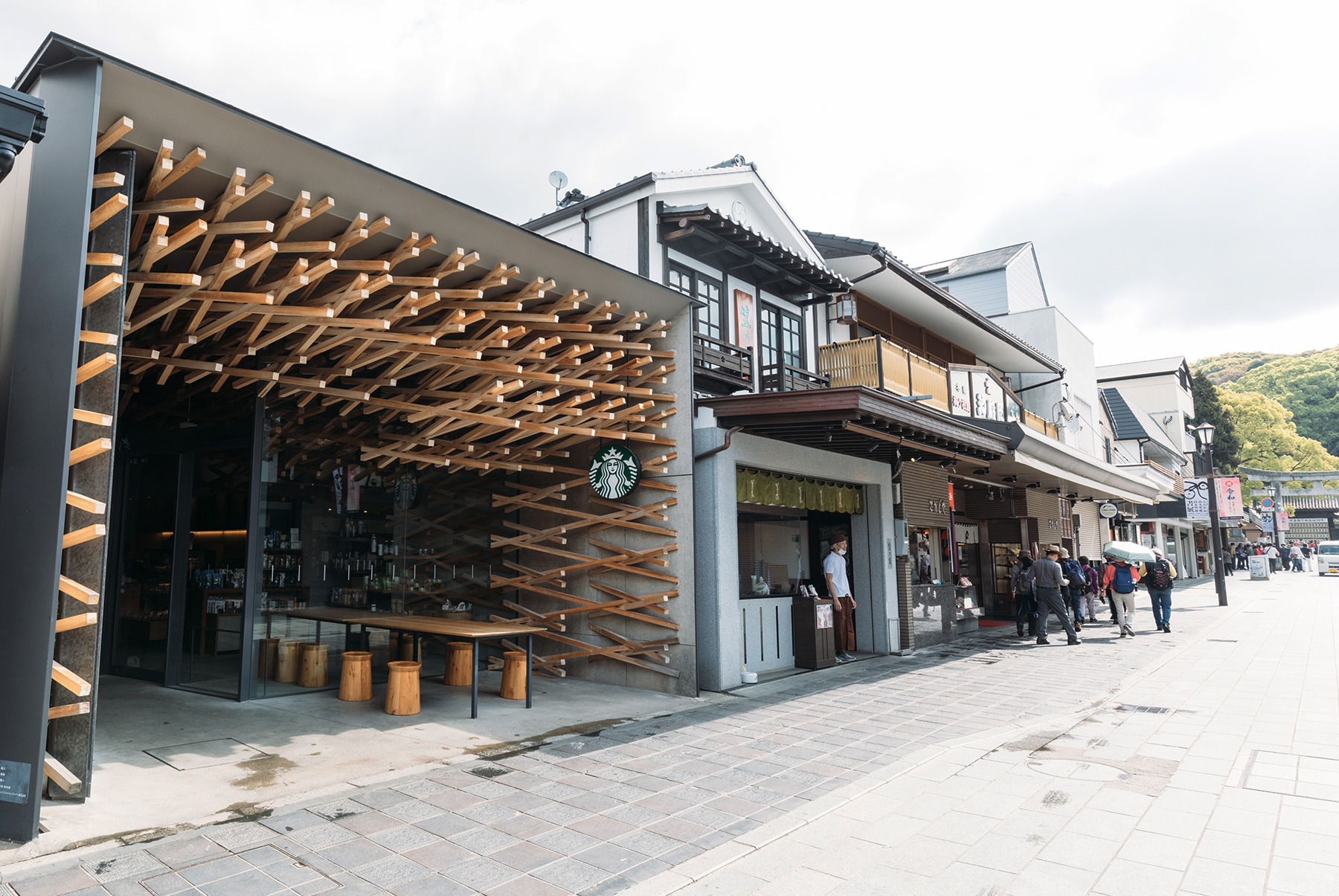 Monzenmachi is the street running from Dazaifu Station to Dazaifu Tenmangu Shrine. It is the main approach to the shrine and a parade route for the shrine's festivals. Shops, teahouses, and cafes line the street selling traditional snacks, souvenirs, and crafts. Large stone torii gates straddle Monzenmachi indicating that Dazaifu Tenmangu is ahead.

Monzenmachi is an ideal place to stop for lunch or refreshments and to try the area's local specialty, umegaemochi, toasted rice cake with a sweet bean filling. Budget enough time to stop to take photos and browse the shops on your visit. A particularly popular photo spot is the Starbucks coffee shop designed by renowned Japanese architect Kuma Kengo. The concept store blends traditional cedar construction with modern, airy design. 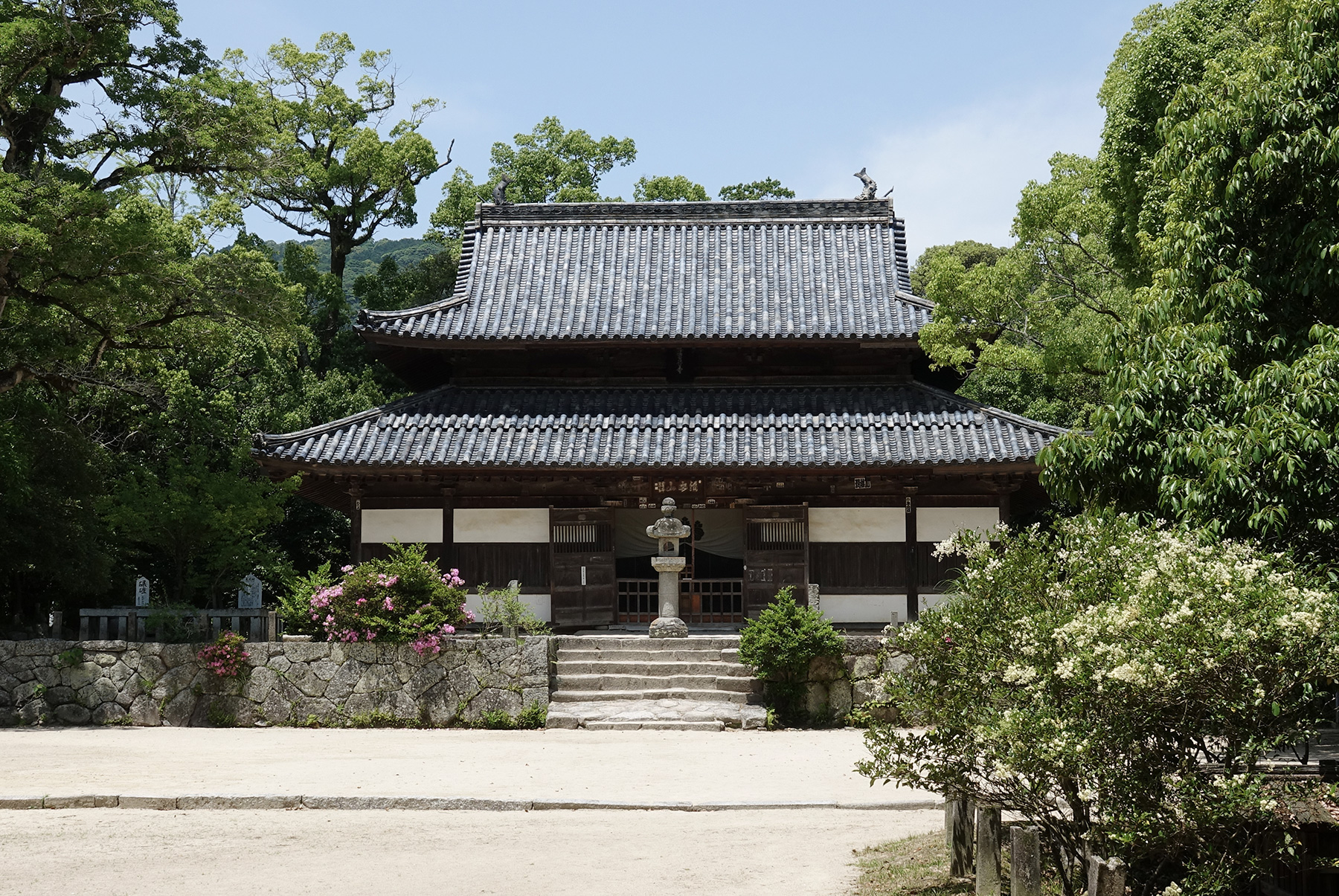 Kanzeonji Temple is an ancient temple with an invaluable collection of Buddhist statues that you can see up close without display cases and other barriers. The temple was founded in the seventh century by Japan's emperor at the time, Emperor Tenji (626–672). It was one of the country's most important temples and one of only three in Japan where new priests could be ordained. The temple at the time was a vast complex with multiple halls and subtemples. Today, the main hall, belfry, and treasure house remain. The Buddhist statues are exhibited in the treasure house. They date from the Heian period (794–1185) to the Kamakura period (1185–1333) and are designated cultural treasures. The bell in the belfry is the original from when the temple was founded. It is a National Treasure and the oldest such bell in Japan. 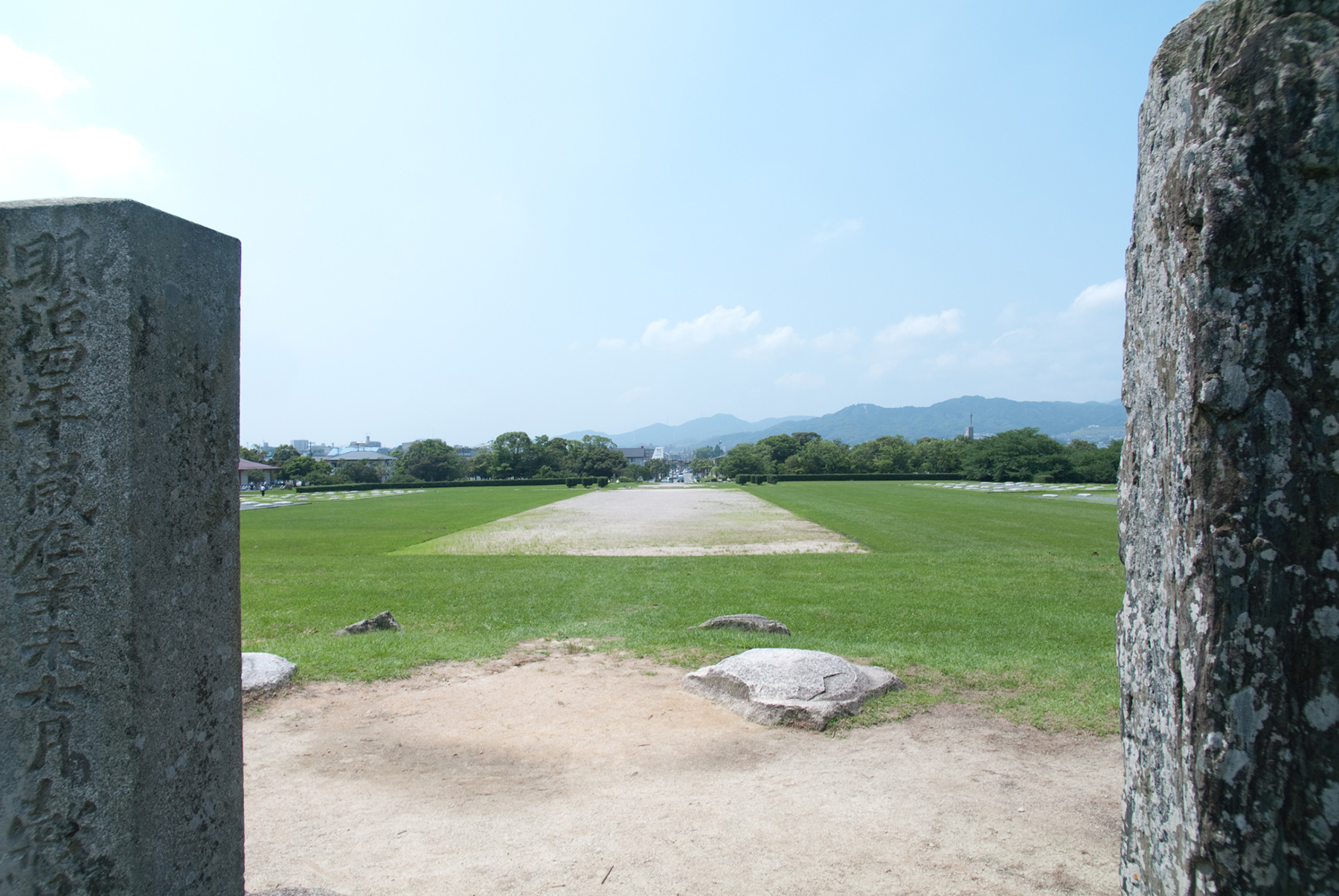 Stroll the remnants of Japan's former western capital when Dazaifu was the seat of Imperial power in Kyushu between the late-seventh and late-twelfth century. For more than 400 years, Dazaifu served as a major political center governing trade and relations with the Asian continent. The Dazaifu Government Office Ruins are what remain of the once-palatial administrative district. Strolling the vast grassland site, you can trace the stone foundations of the buildings that once stood there. Visit the Dazaifu Exhibition Hall at the entrance to the site for more information on the site and what the capital would have looked like. The site represents Dazaifu's history of more than 1,350 years and is walkable in 30 minutes from Dazaifu Tenmangu.

First-Time Visitors
How Long to Spend in Dazaifu